Cornhole at Game On

At Game On you can play cornhole anytime you want by renting one of our sports lanes, but we now are hosting casual cornhole tournaments for you to enjoy some more structured competition. Test your skills in one of our weekly tournaments. You don't need to be a professional, our tournaments are built for fun. Grab a partner and compete for bragging rights and prizes.

Invite your friends to come play, have some snacks and drinks, and enjoy a casual and welcoming atmosphere. 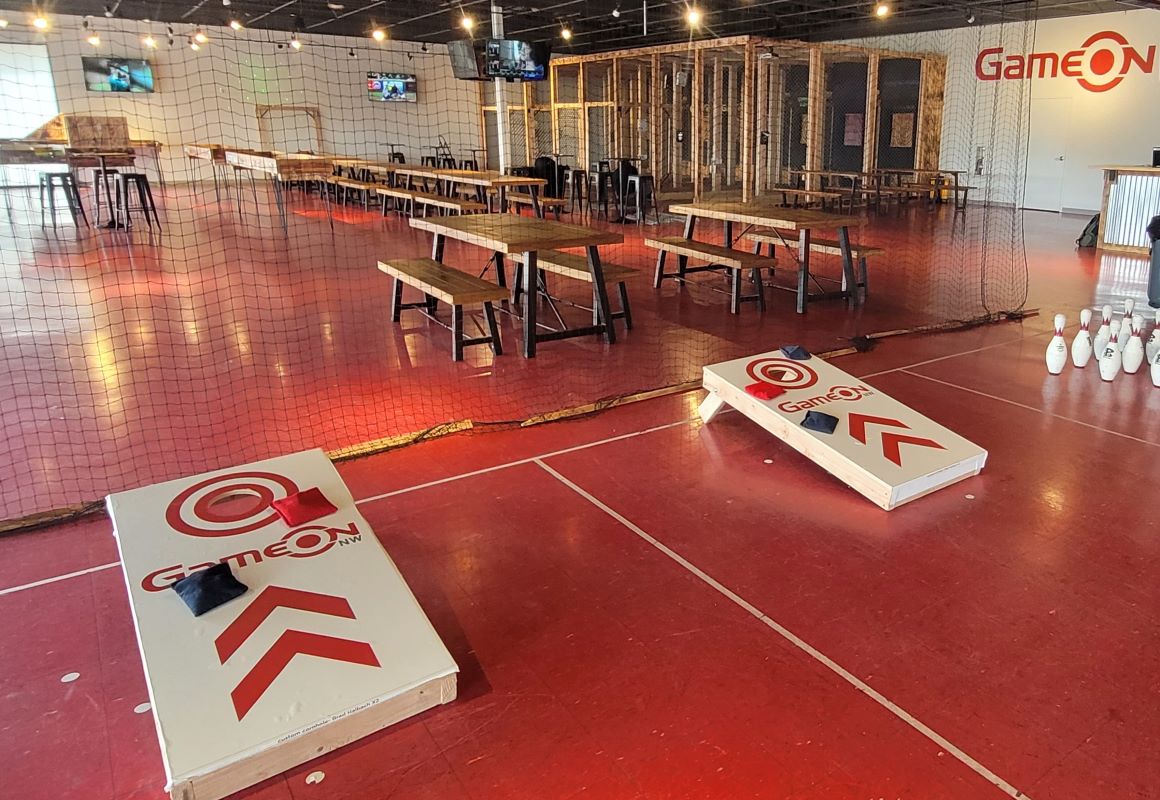 Why Cornhole Tournaments at Game On NW?
Cornhole is one of America’s favorite activities for after work or before the big game. Now anyone can make it a regular activity and get their competitive juices going.

Food & Drink - We want your tournament participation to be a special event.  Enjoy your favorite snacks and beverages.

Entertainment - Enjoy sports on the Big Screens as we show the latest sports going on the TVs including Seahawks, Mariners, Kraken, and Sounders.  Music - We will also have music playing in the background.

Seating - We have some extra seating for spectators to watch the fun and enjoy the atmosphere.

‍Our cornhole tournament will be played based on ACA Official Game Rules.  *Note: we will be using 21' distance between boards rather than standard 27'. Cornhole tournament formats are based on the number of players and time allotted for the event. Tournament types:
‍
‍Double Elimination – Teams are matched-up in a bracket format and any team that loses two games is eliminated. The winning teams continue to play until a winner is crowned. There are many creative ways to organize double elimination games. Here’s the most typical Example: If you have twelve teams, have the teams play each other in the first round – Team 1 vs. Team 2, Team 3 vs. Team 4, and so on. The winners go to the winner’s column and the loser to the loser’s column. At the end of the first round you will have six winners and six losers. In the second round, reward the winning teams by matching-up the winning teams against the losing teams – Winning Team 1 vs. Losing Team 1, Winning Team 2 vs. Losing Team 2, and so on. Continue to play and eliminate teams with two losses. In the event that you have an odd number of teams playing, reward the team with highest winning point margin with a bye.

‍Round Robin – A round robin tournament is when all teams play each other once and the team with the most wins ultimately wins the tournament. So, if you have 12 teams each team will play 11 games. This may be the longest type of tournament.

Playoffs – A playoffs tournament is when the games are combined with a round robin and a single elimination tournament at the end. Teams play a round robin at first to obtain a “seeding” based on winning percentage. When the round robin format is over, an even number of teams are chosen to enter the playoffs round – the top 6 teams, 8 teams, 12 teams, etc. If the number of winning teams from the first round would not result in an even number of teams playing in the second round, then some teams will have to be given a bye in the first round. The playoffs are a single elimination round and the games are played until a winner is crowned. Example: If you have 14 teams, the team with most wins in the round robin is the #1 seed, second most wins is the #2 seed, etc. The top 8 teams make the playoffs – #1 vs. #8, #2 vs. #7, #3 vs. #6, etc.