Our axe throwing tournaments are meant to be Casual Competition. This is NOT the World Axe Throwing League! We designed our tournaments for friendly competition on our Digital Axe Throwing Lanes. Test your skills and make some new friends along the way.

Invite your friends to come compete with you, have some snacks and drinks, and socialize. 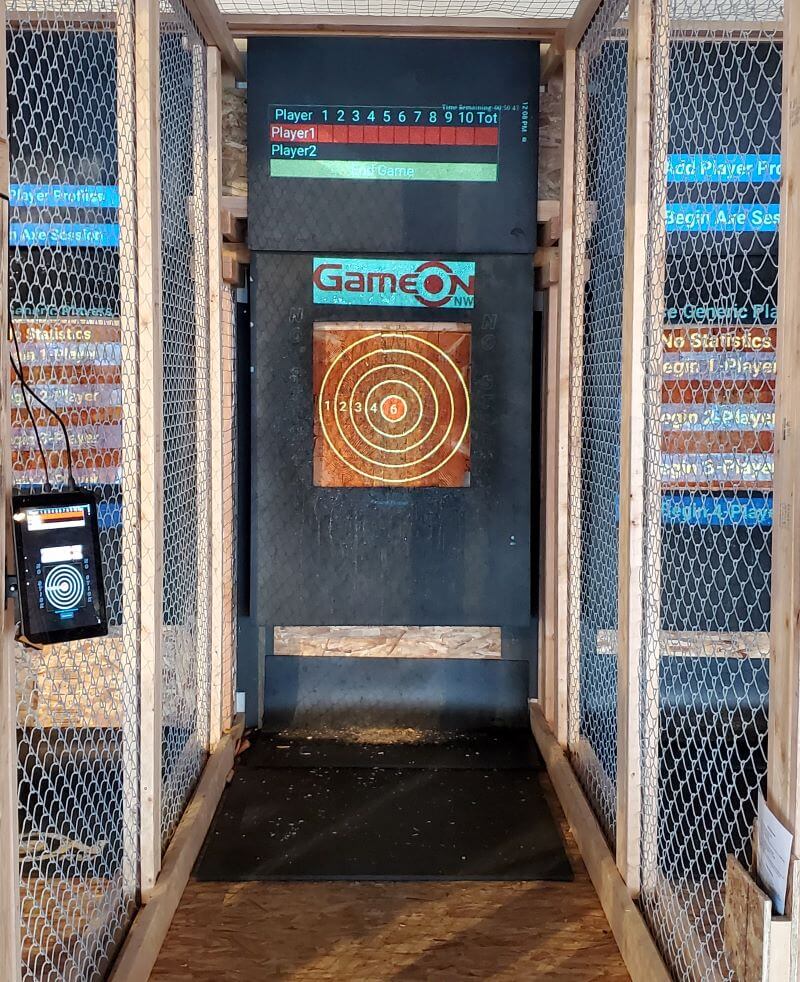 Our Axe Throwing Leagues and Tournaments are very new.
We are trying to build a following to offer more opportunities to host these nights.
Please signup below and let us know that you are interested in participating in a future event.

Sign up to be notified regarding future Axe events

Why Axe Throwing Tournaments at Game On NW?
Axe Throwing is an exhilarating sport with a social competition environment similar to bowling. Now anyone can make it a regular activity and get their competitive juices going.

Food & Drink - We want your tournament participation to be a special event.  Enjoy your favorite snacks and beverages.

Entertainment - Enjoy sports on the Big Screens as we show the latest sports going on the TVs including Seahawks, Mariners, Kraken, and Sounders.  Music - We will also have music playing in the background.

Seating - We have some extra seating for spectators to watch the fun and enjoy the atmosphere.

‍Tournament Rules
Axe Throwing Tournaments will be played on our digital axe lanes. Each match will consist of 10 throws and highest score wins. In the event of a tie at the end of the round, the players will go into a sudden death overtime round where they take turns throwing until one of the players has a higher score than the other.
‍
Competitors will be provided 10 minutes at the beginning of the tournament to warm up. So arrive early.
‍
Scoring - When scoring a throw, the player will take the highest score that the axe has made contact with on the target. This means that if the Valid Scoring Area as shown in the picture below, crosses a line you take the best score that the axe intersects. If there is any debate about a score, you can request for a second opinion from a staff member.‍

Tournament Types
‍
‍Double Elimination – Players are matched-up in a bracket format and any Player that loses two matches, is eliminated. The winning Players continue to play until a winner is crowned. There are many creative ways to organize double elimination games. Here’s the most typical Example: If you have twelve players, have the competitors play each other in the first round – Player 1 vs. Player 2, Player 3 vs. Player 4, and so on. The winners go to the winner’s column and the loser to the loser’s column. At the end of the first round you will have six winners and six losers. In the second round, reward the winning players by matching-up the winning players against the losing players– Winning Player 1 vs. Losing Player 1, Winning Player 2 vs. Losing Player 2, and so on. Continue to play and eliminate players with two losses. In the event that you have an odd number of competitors playing, reward the player with highest winning point margin with a bye.

‍Round Robin – A round robin tournament is when all players play each other once and the player with the most wins ultimately wins the tournament. So, if you have 6 competitors each competitor will play 5 Matches. Round Robin will be used when there are 4-6 or fewer competitors.